The Question of German Guilt book 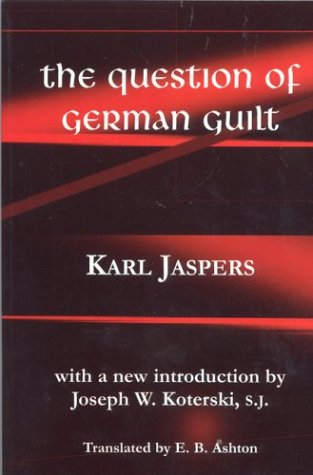 2 In 1946, at the time of the trials of the Nazi élite, the philosopher Karl Jaspers published his booklet Die. The terrorist attacks in Jordan on November 9th were apparently supposed to be a reminder of the 9-11 attacks, because November 9th is written "9.11." in many parts of the world. In the years after the Nazi government fell, a philosophy professor at Hindenberg University lectured on a subject which burned the consciousness and conscience of thinking Germans. As you know, I've been following the Bearer Bonds Scandals, and the German gold audit story, for some time on this website, and many of you are. Jaspers presents four contrastive archetypes of guilt. These are using Germandom policy to make property claims or even openly put into question German guilt for the Second World War. Originally got onto after reading Guilt By Association by Jeff Gates. "[H]ow can relatives think clearly and logically about the moral culpability of someone they love, without interrogating that love itself?" asks Karina Longworth in the Voice. In their debate in Philadelphia, after moderator George Stephanoplous had raised the question of Obama's relationship with Ayers, Hillary Clinton elaborated on the subject, seeking to add to its significance: SEN. New York: Capricorn Books, 1947. I will comment more fully after i've fully read your piece. Sam Inayat-Chisti says: April 7, 2013 at 12:22 pm. THE QUESTION OF GERMAN GUILT A brief view by *Anton Legerer German Law Journal No. 3 Comments to “German Guilt”.